Posted on May 2, 2016 by KIOSK the Weblog at Luxury Traveler 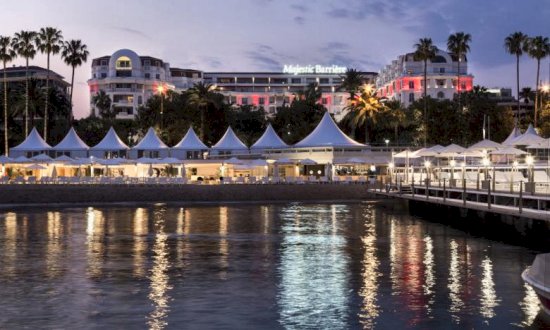 New York, N.Y. – April 22nd – Ahead of time, the palace at 10 La Croisette starts preparing to welcome the biggest international celebrities and shine in the spotlight during Cannes Film Festival. These 12 days promise to be exceptional. Guests particularly appreciating the hotel’s exceptional location directly opposite the Palais des Festivals.

But location isn’t everything, and the excellent service, as well as the extremely high standards of comfort and quality which earned the establishment its international reputation, must remain consistent during these very special 12 days. This is why the luxury hotel’s staff are already busying themselves with preparations, to ensure that each stay is an unforgettable experience. To satisfy every guest, the hotel’s teams will be tripled to accommodate all requests, day and night.

Barrière are often the hotels of choice for Cannes Film Festival award winners. During the 68th edition in 2015, Jacques Audiard set off from Le Majestic to receive his Palme d’Or forDheepan, accompanied by actors Antonythasan Jesuthasan and Kalieaswari Srinivasan. Emmanuelle Bercot, winner of the Award for Best Actress for Maïwenn’s film Mon Roi, Vincent Lindon, winner of the Award for Best Actor for The Measure of a Man; and Hou Hsiao-Hsien, winner of the Award for Best Director for The Assassin, also left their rooms to receive awards that day. During the 66th edition, the director Abdelatif Kechiche, who won the Palme d’Or for Blue is the warmest colour, stayed at Le Majestic’s neighbour in Cannes, Le Gray d’Albion. In 2012, Michael Haneke was also to be seen there, still crowned in glory following his Palme d’Or win for Amour. The Barrière group certainly enjoys an enduring relationship with the art of cinema. In fact, last year Le Majestic decided to pay homage to the film Mélodie en Sous-Sol (Any Number Can Win), filmed in the heart of the hotel, by opening a new, exceptional 200m² Suite, the Mélodie Suite.

La Plage Barrière Le Majestic Cannes, in partnership with ADR Prof and just opposite the hotel, is a world-class location for days and nights spent in Cannes. During the last few years of the Festival, this 2,500m² space has truly become the location of choice for hosting the biggest events including the China Night and the 68th Cannes Film Festival Closing Ceremony, which brought together 1,500 guests.

We at Luxury Traveler subscribe to the notion that "true luxury is the wealth of one's experiences." As such we focus on the finest European arts, cultural & LifeStyle pursuits as well as the talented individuals who bring them to life.
View all posts by KIOSK the Weblog at Luxury Traveler →
This entry was posted in Arts / LifeStyle / Travel and tagged Cannes, Film Festival. Bookmark the permalink.