“The Light Dawned” an annual festival in Latvia

Posted on October 26, 2016 by KIOSK the Weblog at Luxury Traveler 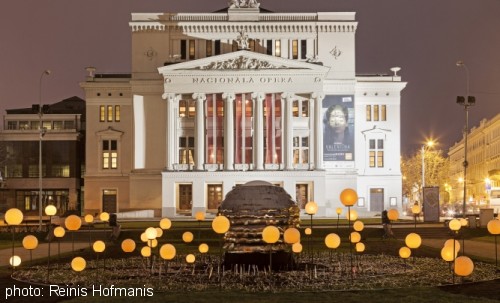 Latvia – In 2008, the light festival “Staro Rīga” took place for the first time being born in the minds of creative, enthusiastic people who wanted to make the dark and humid November lighter and more joyful for us all.  Each year the festival has a theme, and this year it is “The Light Dawned” – words taken from the song “The Castle of Light” by the Latvian music classic Jazeps Vitols and the poet, national romantic Auseklis.  The theme provides rich options for interpretation by keeping in mind the idea expressed in the popular choir song: the victory of light over darkness. It relates to the fight of the Latvian nation for independence and freedom.

November is not only the darkest and the most humid month of the year, but it is also the month when in 1918 the State of Latvia was established. Thus the lighting of the dark time holds a significant additional dimension: the joy over our country.   There were 40 light projects in the first festival; over the nine years both the local artists and art enthusiasts and foreign masters have been involved in organising the light festival in greater numbers.

The facades of the buildings, small and big bridges, parks and squares are lit. Each year brings us a special surprise; for example, the fountain of the water of light will be remembered by many, as well as the Fairy Tale Forest in the popular Vermanes Garden, the projection on the Monument of Freedom with the musical composition “Three Stars”, the romantic clothlines in the Old Riga, displays in the “Aerodium” wind tunnel, etc.   Even though the festival enters the streets of the city as a special time when you have no wish to go to bed in the evenings and instead wander off for a walk through the old Riga, the festival might be especially magnificent after two years: in November of 2018 we will celebrate the hundredth anniversary of our country.

Editor’s Note:  We bring you this item with the compliments of Latvia, use this link for further info ………